It's never easy to say goodbye. Running a sanctuary for senior horses requires us to say goodbye at some point to our beloved four legged family members. The following are those that we've said goodbye (but will not be forgotten).

﻿
﻿
Tiny Dictator was not a rescue. He was in fact my very first horse and my dream horse. He was tall, dark, and handsome. He came from Colorado and had been a ranch horse for the first part of his life. We grew up together. As I grew up, he grew older. He was a patient gelding that would let me do anything. He was the perfect horse for a teenage girl. Dictator helped me accomplish items on my bucket list. We rode together until we were both 25 years old when I decided that he should be permanently retired and enjoy the last few years without having to work. He was the herd boss and everyone followed him. Dictator was also the catalyst for changing our mission from rescue to retirement.  After his passing, I realized that I wanted to offer old horses a place to retire. I wasn’t with Dictator when he passed away February 25, 2007 (one regret), so I vowed that I would always be with each horse until their last breath. Dictator gave so much and taught me so much (and never asked for anything in return). The Sanctuary is in his honor, and to honor all those horses that deserve a permanent retirement home. We said goodbye in February 2007. Tiny Dictator was 28 years old.﻿
Babe opened our eyes to a new world of horse ownership. Babe came to us with very limited vision (she could see shadows when going in or coming out of a building). Her owner wanted to find Babe a safe haven and had made the tough decision that if she couldn’t find the right home, she would euthanize Babe. We stepped up to offer Babe a permanent retirement home and believe we came out on the better end of the deal. Babe taught us not only about working with a blind horse, but in enjoying life no matter what comes our way. Babe was a sweet mare who had a full life. In working with Babe, it’s easy to tell that she was well taken care of during her earlier years and that she trusted her handler 100%, even when she went completely blind. She never got upset or frustrated with her disability. She simply worked through it. If she became disoriented in her pen, she would simply walk bigger circles until she found where she was at. That old mare had such a memory! She knew where everything was in her pasture and pen. She loved her treats, especially peppermints and candy canes. We said goodbye to this wise old mare in September 2013 at the age of 31.
********************************************************************

Blondie (aka Sun Gold Doll) was our first mare we ever took in. We have no idea what type of accident she was involved in but her body showed the scares. She was also blind in one eye, most likely due to the wreck. Blondie was a dominant boss mare that kept the herd in order. She was always the first into the barn for her daily grain. Either due to the accident or breeding, Blondie only had a total of 12 teeth. She had three on top and three on the bottom (on each side). She had to have a grain mash and soaked alfalfa cubes to help keep her weight up. When we brought Blondie to the Sanctuary, we decided to retire her immediately and let her enjoy being a pasture puff, no riding and no working. We had Blondie less than a year before she had an incurable infection in her jaw. We said goodbye to Blondie in May 2008. She was only 16 years old.
**********************************************************************


What about Bob? Bob was our first draft horse (and the reason why I’ve fallen in love with the Percheron breed in particular and drafts in general). Bob was a laidback gelding who preferred retirement life over working. We don’t believe Bob was used much to pull a wagon but was more of a riding horse. His body didn’t show the telltale signs of being harnessed and used on a daily basis like some of the other drafts that came to the Sanctuary. Bob loved his grain. An hour before everyone else was fed, we would put him in his stall to enjoy his grain. Bob would savor every morsel of grain and licked up every last ounce of grain. He was a messy eater, which helped him make the meal last that much longer. We said goodbye to Bob in November 2009. He was 21 years old.
*********************************************************************************


We were asked to take Dick, an old white Percheron after his teammate had passed away earlier that late winter/early spring and his owner’s health was failing.  Dick had an aura about him of self-assurance. He knew who he was and wasn’t afraid of anything. On occasion his old owner would stop out and you could see in Dick’s eyes that he recognized his owner (and missed him dearly). We decided to put Dick in with Rabbit to keep each other company. Surprisingly, that match worked and Dick seemed to settle down and enjoy the retirement life. We only had Dick for a few short months before his age finally caught up with him. We said goodbye to this handsome fellow in August 2011. He was 28 years old.
**********************************************************************

We pulled Sahara, along with her mother Savanna and unborn brother Sir Prize aka Jett, from an auction over Easter weekend. Sahara and Savanna were both underweight and malnourished. Sahara was also crippled. We don’t know how she became crippled or if she was born that way but her front legs were not straight and put weight on her front legs unevenly. We highly doubt that Sahara had much human contact although she did learn to trust us to halter, stand, and lead. As Sahara regained her weight, that added weight put extra pressure on her legs and she became uncooperative and unhappy. Knowing that there was very little we could do for Sahara, we made the tough decision to say goodbye.  Sahara’s suffered ended in December 2011. She was only a yearling.
**********************************************************************
We offered Sam a retirement home after spending most of his life as an Amish workhorse. His body showed the telltale signs of the hard work he put in every day. Even in his older years, he would still veer off into a field approach when trail riding, thinking that it was time for work. Sam loved his grain and would whinny his high-pitched whinny when it was feeding time. His whinny always made me laugh. Sam wasn’t nearly as bad as Bob about spilling his grain everywhere in the barn to make it last but he did savor his meal as long as possible. He had a goofy expression in the summertime when his mustache would grow out. Unfortunately the hard life Sam lived before coming to the Sanctuary took its toll on his body. We learned to deal with ulcers and other health problems due to Sam’s stress level. In the end we said goodbye to Sam in January 2012. He was 22 years old.
********************************************************************* 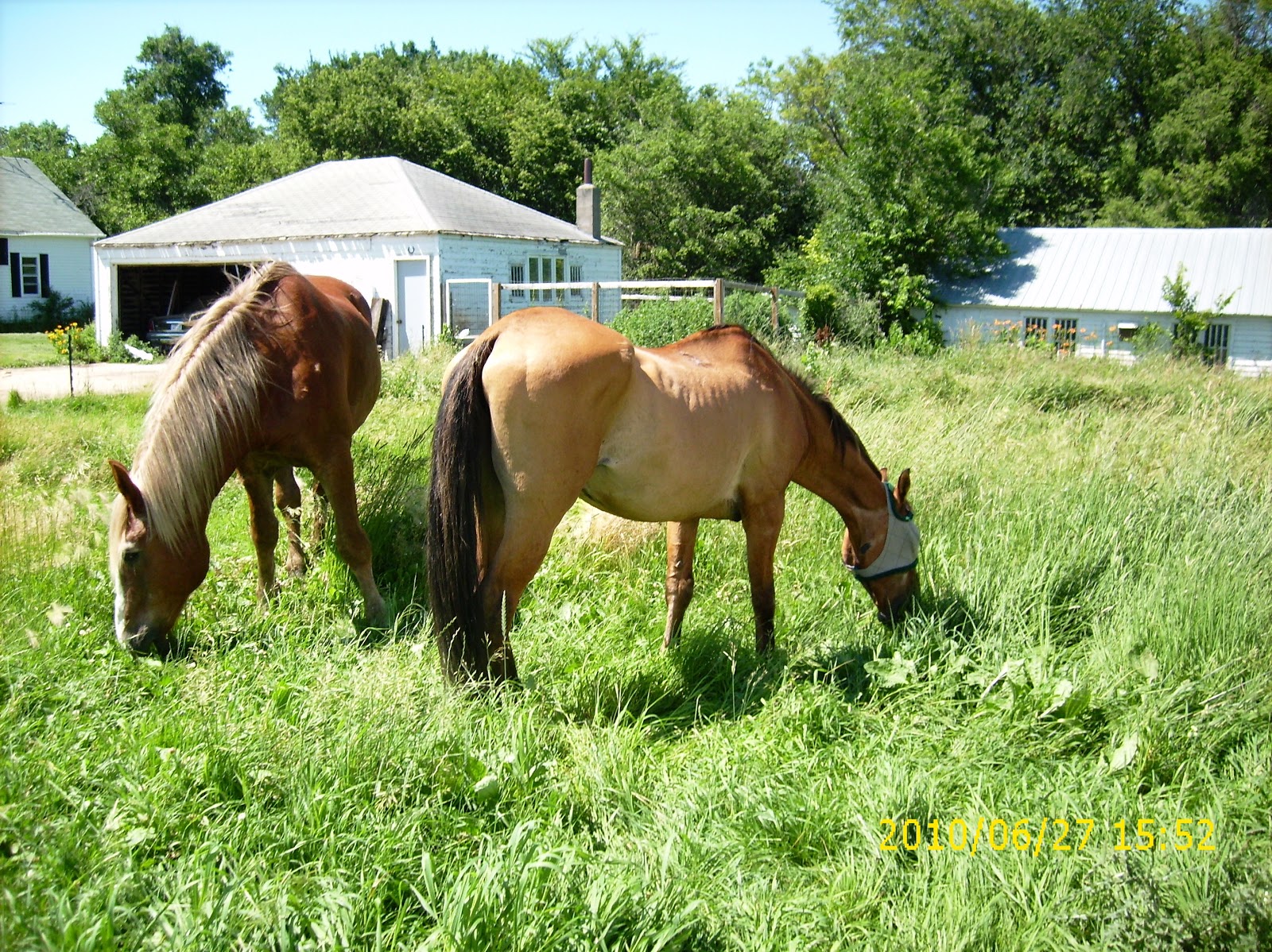 Joe was an old ranch horse. He’d been picked up at an auction in Minnesota and became fast friends with Thor, the Belgian. They were both adopted to a youth ranch and used in their riding program. Unfortunately, Joe’s past caught up to him. His body had taken a toll and he started showing signs of instability not long after we brought him home. Of all the horses that have come to the Sanctuary, Joe’s history is the only one that showed on his face. Joe had scars from where a halter had been left on too long and his face and grown around the halter.  His eyes however gave away the wisdom that he held. He never once took out his frustration on everyone. He was such an easy going old gelding. He would come at a trot when it was grain time, with Thor hot on his heels. Even when the neurological problems started getting worse, Joe kept a positive outlook on life and never let his health problems get in the way of him getting to his grain. We were only blessed with Joe for a few precious months. We said goodbye to Joe in October 2010. He was 24 years old.


We rescued Longhorn, the donkey from an auction. We were the only bidders (and got him when the auctioneer asked if anyone would take him for $10). When we first brought Longhorn home (the paperwork said he was a longhorn instead of a donkey, hence the name), he was in such shock that I was able to get a halter on and lead him around the yard. Unfortunately, after a few days of letdown, it was easy to see the cruelties that had been put upon him. He had seriously foundered somewhere in his past and didn’t trust humans. He wouldn’t let anyone touch him, or come near him for that matter. We worked with Longhorn to try and break through that barrier but with the pain of laminitis and his past, we decided that it would be best to say goodbye. Longhorn’s suffering eased in February 2010. We have no idea his age.
Ten Man
Ten Man was our first horse we rescued from auction. The only reason that we were able to bring Ten Man home was because no one else bid on him. The auctioneer asked if anyone would take him for $10 and I raised my hand. Ten Man is one of my few regrets. I regret that we didn’t give him the summer to enjoy the sunshine on his back. We only had Ten Man for a very short time. Ten Man had incurable health issues and was extremely thin. Even with all his ailments, he was a very sweet and kind horse/pony. At one time you could tell that he had been loved and well taken care of. Unfortunately his health issues forced us to say goodbye without getting to know him better. We said goodbye in May 2009. He was 30+ years old.
Ace
Ace (registered name Gallant) was my long term riding partner. Ace taught me how to ride. More than once we would race across a pasture with me sitting on his back hoping at some point he would stop running. Ace wasn’t technically a rescue but he’d had numerous homes in the 16 years before he came to live with us. While parking cars at the Prairie Village Threshing Jamboree someone approached Ace saying that he thought he recognized the horse and that he used to race. That would explain why Ace wouldn’t stop. As far as I was concerned (and still am), Ace was the fasted horse in Lake County. I have yet to ride a horse that reached the speeds Ace had. Ace did start experiencing health issues as his age progressed and he partially retired him at the age of 22 and permanently retired him at 23. Ace taught me how to care and maintain a hard keeper.  Many a night I stayed up with him worrying about his health. In the end, we said goodbye to Ace in November 2008. He was 27 years old.