Was Christmas draws nearer (in only six more days), the horses at the Sanctuary have their own Wish List for Santa. I told the horses that if they wanted Santa to bring presents, that they'd have to keep it under a certain dollar amount (because otherwise, they'd be wishing and asking for semi loads of hay!)


So here's the horses' Christmas Wish List if anyone is interested in helping us put these presents under the Christmas tree.


Mayhem would love brushes to keep her red coat nice and glossy (all usually under $10).


Lace would like some Buteless to keep the aches and pains away during the chill of winter. Her knee and fetlock are really starting to bother her (costs $50 but lasts a month).


Dude would like some Dumor Weight Booster so he can continue to pack on the pounds and be top dog in the herd (is only $20).


Jim would love to have Dumor Senior Feed (or any type of senior feed). He's the oldest resident and deserves to enjoy his warm grain mash every night (Dumor Senior Feed is under $20 but the other brands are right around $20).


Tommy would love a salt block. He prefers to scrape off the salt with his teeth rather than lick it off (salt blocks are around $5 a block).


Skippy would love a Himalayan salt block so he doesn't have to share salt with  Tommy (these salt blocks are a little more spendy than the white salt blocks but are around $10).


Maverick would love some toys. He's destroyed other toys and he's getting bored now that the nights are so much longer (depending on the toy they range from $10 to $25).


Brego would like some over the fence feeders so he can enjoy his grain without having to share with the cats (these run about $10 per feeder).


Chaos doesn't know it but he'd really like some dewormer. He may not want it but he'll appreciate it later! It's like getting socks and underwear for Christmas. When you're a kid, you hate the idea but as an adult, you love it! (Dewormers range from $2 to $10 and are always needed even if they don't know they want it)


King would love some Purina Strategy so he can keep his plump figure. (Strategy is about $16 per bag)


All of these items are located at Tractor Supply Company and many are also available in Campbell Supply, Runnings, Bombgar, etc. So take a peak and see if there's anything you'd like to help put under the Christmas tree for the Sanctuary horses! 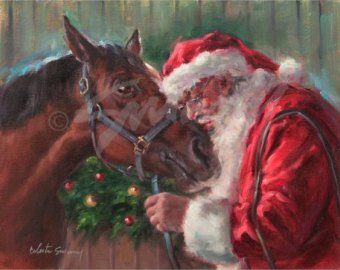 Posted by Borderlands Horse Sanctuary at 8:25 AM No comments:

Man o man has it been awhile! Well, to reassure you, we are here and doing well.


I am just now returning to the paying job which means I'm in front of a computer a bit more than before. All I had before was my phone, which is somewhat easy to update Facebook but impossible to blog.  I'm not sure how well I'm doing in getting back into the routine of things.


I seem to be forgetting more than I would like. But I'm going to blame the hubbub of Christmas and all the kids' activities.


If you haven't been following us on Facebook, well, the horses are doing just fine. I'll have to post some pictures later but they are all wearing their wooly coats, standing in front of the hay bales, enjoying the weather.


We've actually been having some really nice weather the last few days. Temps are in the mid 30s and there's no snow right now. I worry for our pastures, although the bottom pasture is flooded due to all the tiling going on.


We are still getting asked to take in horses but we are even more limited on time so we are slow to take in any more. I'm hoping the new year will be easier and I can figure out the proper balance between the paying job (which is new...I switched right before I went on maternity leave), running around with all the kids' activities, family events, and caring for the horses.


We are desperately in need of volunteers to help with everything. I know when people see "volunteer", they think that they have to be physically here. In fact, all the stuff I need done, is all online. I'm dropping the ball on so much stuff and losing out on opportunities left and right. So I need eyes and ears and a whole heap of help from others right now until I can figure out how to juggle everything.


I really want 2019 to be an amazing year. I have lots of social media posts to share but still need to get there.


But for now, just wanted to say HEY! We are still here and to say, we'll be back shortly with more updates.
Posted by Borderlands Horse Sanctuary at 2:26 PM No comments: