While we don't typically dress up the horses, we do bundle them up in blankets. They have a full wardrobe of blankets to keep the chill off of them during the long, cold South Dakota winters.


We'd love to see your pets dressed up. Head over to our Facebook page and post a picture of your dressed up pet in the comments of our National Dress Your Pet Day post.

Posted by Borderlands Horse Sanctuary at 8:24 AM No comments:

If senior horses could text: 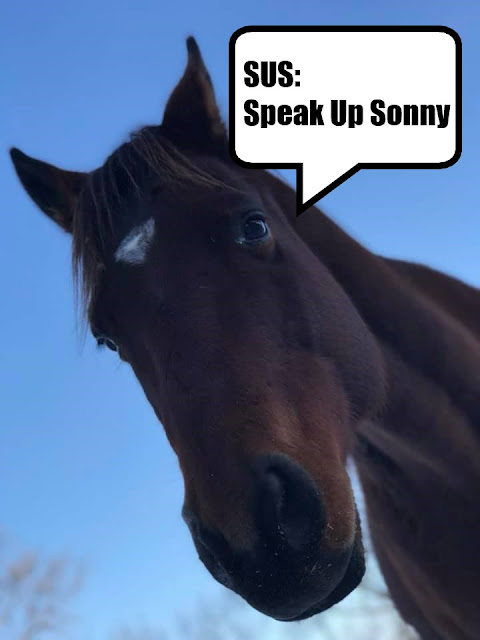 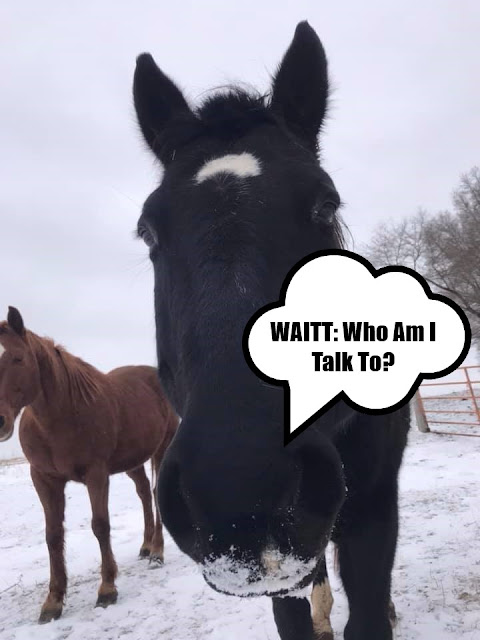 Posted by Borderlands Horse Sanctuary at 12:38 PM No comments:

Posted by Borderlands Horse Sanctuary at 3:30 PM No comments:

A Decade in Review

We are officially a week into 2020. Time is flying. It’s hard to believe that we are already into a new decade. It was just yesterday that we started 2010. So much has changed over the last 10 years both at Borderlands and in my personal life.


In 2010, Mike and I got married. Dad rode Chaos and I rode Zeke to the little white church on that amazing day. Both horses did splendidly (as I knew they would). We also welcomed Joe, Thor, and Ivan into Borderlands. Sadly, we had to say goodbye to Joe as his body couldn’t hold up to the rigorous of his past life.


In 2011, we turned our focus from any horse to senior horses. It was also the biggest year of intakes for Borderlands. Of the seven we took in, five were emaciated. We rescued Bo, Savanna, Sahara, and unbeknownst to us, Jett (previously known as Sir Prize) all from auctions. We also took in Flower, Dick, Rabbit, and Mayhem and fostered Prince for a short time. It was a tough year but worth the wake up call that we needed and are happy that we are focusing on seniors. We also said goodbye to Dick as his body gave out as did Sam’s. Both big draft horses but coming from two different worlds. One of pampered life and one of hard work. But both were ensured a dignified retirement and final days on this earth. We also said goodbye to Sahara. Her body was too far damaged to continue on in this world.


In 2012, we went through the hottest summer on record and through the blessings of a good neighbor used his pasture after ours dried up after only a few weeks of grazing. It was a tough year but an amazing year as it was the year my first was born. Borderlands was pretty much on standby while I was pregnant and struggled to care for the horses but it was a happy year. We also lost our beloved Queen and Thor in the fall along with sweet, sweet Flower.


In 2013, I experienced the worst and darkest time of my entire life. I have never before or since that time been so scared in my life. I almost lost my son that year (and my entire little family if you get right down to it). It was a struggle to move forward as we continually waited for the other shoe to drop. We also loved our beloved Babe, who had taught us so much about trust, patience, and being ok with what life has dealt you.


In 2014, we began to rebuild and become re-energized both personally and with Borderlands. We were starting to get our name out there. Being a private endeavor, we were still fairly quiet about what we did but still happy to help when we could. We welcomed Junior in November.


In 2015, we took another pause in most things Sanctuary related other than caring for the horses as once again I was pregnant and all but the basics of chores were taken care of. We welcomed not only our daughter in 2015, but also Lace in December.


In 2016, we FINALLY became a 501©3 nonprofit. We began to slowly make a name for ourselves and showcase the horses. We’d been a sanctuary for 10 years and were now official and could actually feel like we could talk about what we do and make a difference for more horses.


In 2017, we continued to plug along meeting new people and supporting our seniors the best we can to ensure quality of life. After years of struggling with Rabbit’s disposition, we discovered it was all pain based. Sadly, we couldn’t fix the pain and she told us she was ready to say goodbye. In the fall, we tragically and suddenly lost Ivan to colic. His unexpected departure from this earth rocked us and made us realize that we need to hold our loved ones close.


In 2018, we once again put all Sanctuary life on hold except for the day-to-day care of the horses until we had our third son. We struggled with the loss of Bo in February and Junior in July. Both hard keepers and both who had made a big impact on our lives, specifically Bo. Never will there be another horse like him.


In 2019, we started counting the number of horses we were asked to take in, and it was the most we’d ever been asked. It was a year of change and struggle but worth it knowing that we are making a difference even if it’s only for the lives of a few horses. We welcomed MyGirl in March and started our Long-Term Foster Program in June. We also welcomed Good Friday Jessie, Diavlo, and Ransom in September/October. It was exciting to welcome so many new faces into Borderlands. Sadly, we also had to say goodbye to Lace and Ransom in November. Heartbroken for the loss but knowing we made the right decision for both, as we know we have to ensure quality of life for all the horses at call Borderlands home.


It's been a decade of extreme highs and excitement when we met new people and horses and extreme lows as we have to say goodbye to our beloved horses. They are not just horses who pass through our gates. They become family and their passing from this earth is a loss that we feel forever. But we are happy to be a part of their life even if it’s only for a short time. It is always about the quality of life, not quantity.


We hope that the next decade is as exciting as the last and has more ups than downs. We would love for you to join us on this crazy adventure we call Borderlands Horse Sanctuary.


Posted by Borderlands Horse Sanctuary at 9:36 AM No comments:

Yesterday was 12th Night (also known as Little Christmas), which gave us time to reflect on our little family.
Our family tree has ornaments for all the years we’ve been a family. Ornaments are scattered among the lights and pine needles.
Some ornaments hold a special place in my heart. These ornaments are the ones that represent a Borderlands Horse. Each horse at Borderlands is considered family and thus deserves an ornament on the family Christmas tree.
We continue to add each year as new horses join the Borderlands “family”. Here’s just one or two that adorn the tree.
PS if you can find some inexpensive horse ornaments, let me know! We don’t have all the horses represented on the tree yet. Do you know how hard it is to find horse ornaments?!?
Hope you all enjoy Little Christmas. 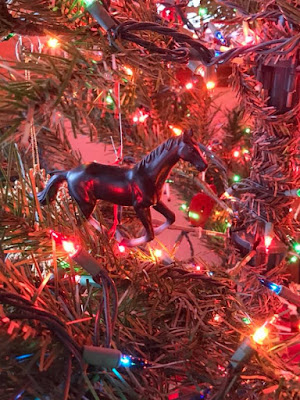 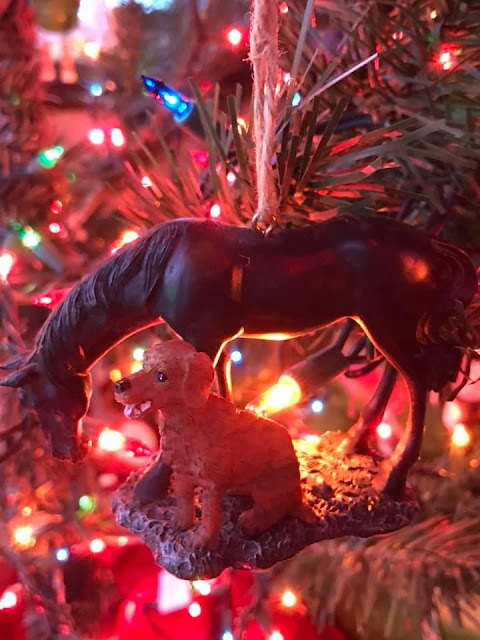 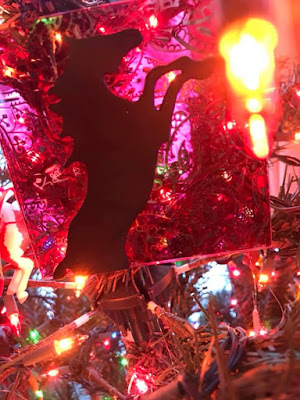 Posted by Borderlands Horse Sanctuary at 7:48 AM No comments:


I'm still trying to get motivated after Christmas break and to figure out what needs to be tackled first. When time permits, I'm slowly putting the purlins back on the run in shed where the tornado ripped the roof off of it. It's been too many years waiting for help so now I'm tackling it on my own but only when there's free time (which isn't a lot). We'll see how long it takes now that I'm slowly redoing the roof.


There's nothing new going on. Now that Christmas has passed, we are hunkering down and dealing with winter. I'm ok with the snow so that it helps keep the pasture covered. I need to start planning  on how to manage the pasture this coming year to make sure that we dont' over graze. I think the way we've been doing it just isn't working any more. Time to learn a new way.


It's hard to believe that it's the first Monday of the new year already! So many opportunities to do great things this year! We hope you come along for the ride!


Posted by Borderlands Horse Sanctuary at 7:52 AM No comments:


Hey you! Did you make any New Years resolutions?If you did, did any of them include:*Being outdoors more.
*Exercising more.
*Making DIY projects.
*Getting away from social media and electronics in general.
*Relaxing more.

If you answered yes to any of those, then we have a deal for you! (Admit it, you just heard the bad tv commercial voice in your head).

Become a volunteer! We have many opportunities for volunteering. Some options are with horses and others are without horses (you take your pick)! We have lots of great outdoor activities and inside activities so you can pick and choose what you want to work on (because we need all the help we can get)!

Email us today at borderlandshorsesanctuary@yahoo.com (or message us through FB) if you are interested in volunteering this year and help start 2020 off with a great start. 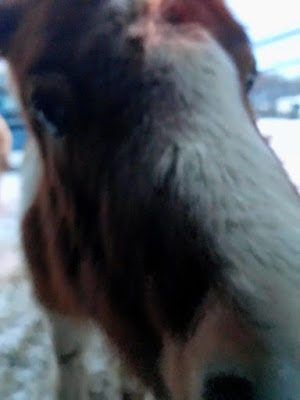 Posted by Borderlands Horse Sanctuary at 7:44 AM No comments:

2019 left with as much bravado as it did when it came in. For many, they are happy to see 2019 leave. For me, seeing 2019 leave is with mixed emotions. There's always the extreme lows that come in a year but there's also the extreme highs. I am excited to see where 2020 takes Borderlands.


In 2019, we were asked to take in 45 horses. Of those, we said yes to 5. Of those 5, 1 went to long-term foster, 1 refused to load into a trailer and ended up going to a different home, and 1 we said goodbye to due to severe founder. That left us with 2. Odd how the numbers stack up. In the past years, we've only said yes to 1 horse a year and not even every year. In 2018, we didn't take in any horses even though we were asked (but I didn't keep track).


Some might look at our numbers and question why we make a big deal out of it. Because we are a Sanctuary, we keep them for their life and that means years go by before we say goodbye to some. But we do what's right for the horses at Borderlands and keep our numbers low. This way we get to know them and know what they need. It's also a way for us to know when we need to say goodbye. We treat each horse and their individual aches and pains, just as I hope someone will do when I get old and move into a nursing home.


This year, I hope to do more blogging so you can see our every day activities. Life happens and sometimes the day-to-day activities don't seem important until you look back 10 years later and see what progress has been made.


I'm hoping in 2020 to make some changes that will make a huge impact to Borderlands. Only time will tell if we reach those goals but that's what goals are for. We hope you continue with us on our journey of caring for senior horses in South Dakota and the stories that may come from these adventures.


May 2020 be a blessed and happy year for you and your loved ones (both two legged and four legged).


Posted by Borderlands Horse Sanctuary at 7:42 AM No comments: