This Throwback Thursday is to just under two months ago when we had our last official blizzard (and second to last snow storm) that dumped almost a foot of snow (ok so maybe it was only 6 inches). It's hard to believe that there was snow two months ago when we are going to be going into 90 degree weather this weekend. 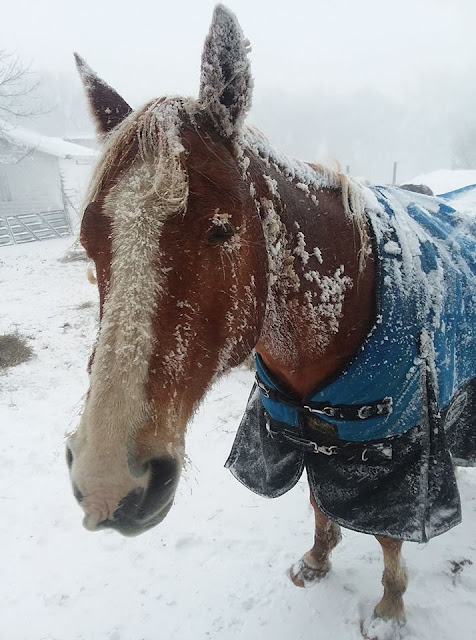 Posted by Borderlands Horse Sanctuary at 8:06 AM No comments:


It's Wishlist Wednesday and today's wishlist item is Farnam Fly Masks (or any fly masks for that matter).

The horses were hard on fly masks last summer so we don't have many (if any) in reserve for this summer. We want to make sure that everyone is comfortable when fly season rears its ugly head. Trying to be proactive in getting everything rounded up now so that there's no mad rush to find fly masks. Fly season will start soon but it'll really get bad around August.
Farnam fly masks seem to work the best for the Sanctuary horses. They typically cost around $15 (but correct me if I'm wrong). We need 2 yearling fly masks (for Tommy and Skippy), 2 Arab fly masks (for Zeke and Rain), and then 9 regular size for the rest of the herd.

Anyone want to donate to buy a fly mask or want to purchase one?

You can donate thru PayPal at www.paypal.me/Borderlands or sent it via check at 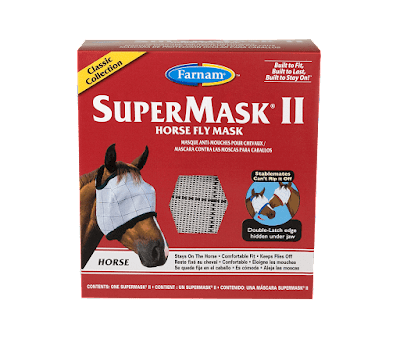 Posted by Borderlands Horse Sanctuary at 8:06 AM No comments:

After a short break, we are back to #TipTuesday. Todays tip is about laminitis. Since most horses are out on pasture already (or they are starting to go out on pasture like the Sanctuary horses), it's time to keep a watchful eye on your horse for laminitis.


King is prone to laminitis so we are keeping a very close eye on him. Here's two infographics that might be of some help learning about laminitis.

Posted by Borderlands Horse Sanctuary at 7:46 AM No comments:

It's been too long since I have posted consistently so I'll just leave you with a picture from early this morning. 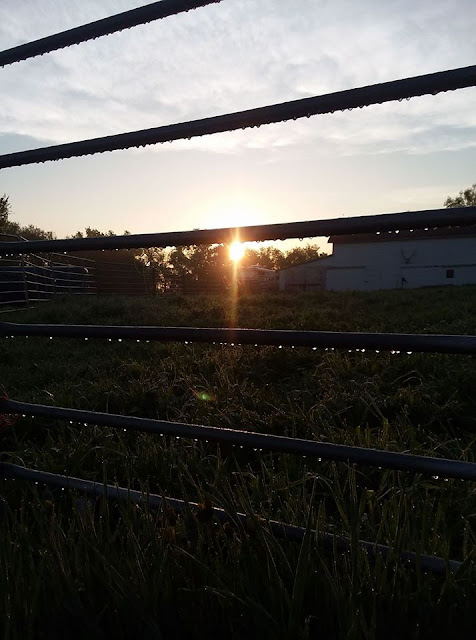 Posted by Borderlands Horse Sanctuary at 7:28 AM No comments:

I sort of had it in my  mind that I would spend most of May away from the computer and social media. I've been too stressed lately and don't want to bring anyone down.


But when we finally do have fun stuff going on, I want to share.


I normally like putting horses out on the lawn the first of May but with the weather and my health, it's been impossible until this past Saturday. I had to keep everyone from trying to mow the lawn because it was getting too high. I want the horses to eat it down.


I like putting them out on the lawn so that they get used to the grass and I can call them in easily. Out in the pasture, they won't come in. I want to get them into the routine of coming when I call for them so that I don't have to wander the pasture in the middle of the night to get them to come in. I doubt that'll be a problem because we are going to be overrun by mosquitoes this year. The local farmers have tiled all their field and guess all that water is now going into OUR pasture. I'm not happy. I would have fought that decision had I known. But I'll be doing some of my own "field work" this fall to rectify the issue.


But I digress. The horses are happy and finally getting a few blades of green grass and that makes me happy. They all look really shaggy. I haven't felt well enough to get out and groom them. Junior looks terrible. I really let him down. I've been so under the weather I didn't get to grain him every night because I knew I couldn't make it back out to let him out of his stall. He takes up to two hours to eat his grain. And once May rolls around, he needs to be on grass immediately and I only started getting him on grass this past week. So he's looking like he's on his last legs. It could be that this is his last summer but we'll have to play it by ear. If he picks up weight with the grass and grain, then we'll see but if he continues to go downhill, then we'll look at the alternative.


But for now, I'll leave you with a few pictures of the herd enjoying their first taste of the 2018 grazing season. 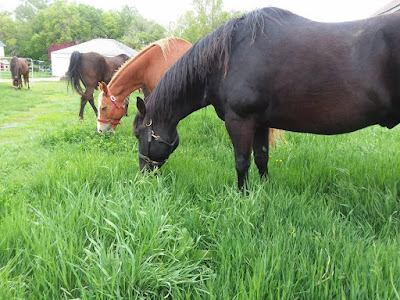 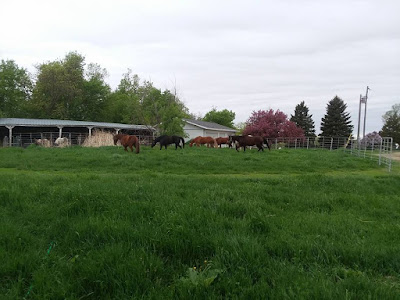 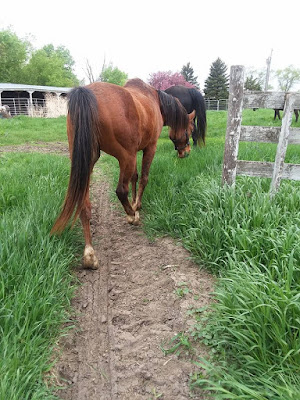 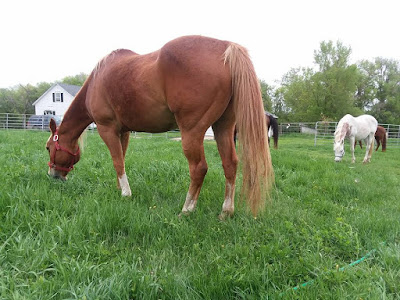 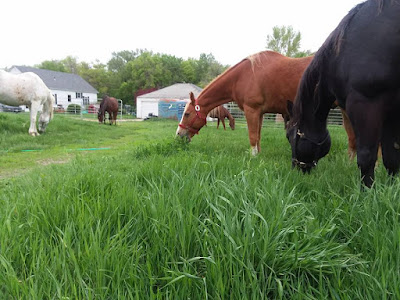 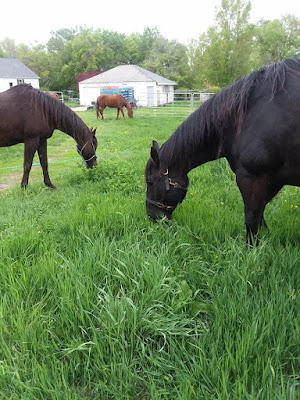 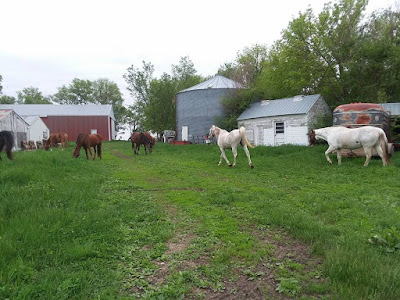 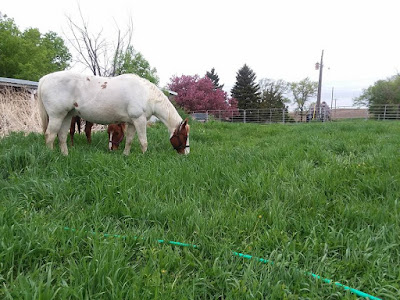 Posted by Borderlands Horse Sanctuary at 8:23 AM No comments:

I'm no stranger to death. Running a sanctuary that focuses on old horses means that we are constantly watching each horse's health, happiness, and life quality. It's a day-to-day thing and we as caretakers are the ones who sometimes have to make that final call.


I still struggle, months later, with the loss of each horse. As we roll through May, I remember this as the month that we lost Rabbit last year. Its' also the month that we lost Ten Man and Blondie (who we don't normally talk about because it's been years since their passing). It's also been almost three months since losing Bo. But the loss and heartache is still there. It's the what-ifs and what should have beens.


I am glad that I am the one to be the final caretaker. To be privileged with the opportunity to meet these amazing beings. Each comes with a story, some they share, some they don't. But we all have a history and a life to live.


But even as each being crosses over and leaves me behind to wonder, worry, and recover, life goes on. Earlier this week, we were informed that a relative had been killed in an accident. I wasn't close to this relative but I always felt as though I could speak my mind and possibly be more vocal and opinionated without having to worry about stepping on anyone's toes. Life always made it difficult to do more than see each other once or twice a year but it was always fun to hear stories and know that I could let my guard down.


So now I sit here struggling with another loss. The suddenness is probably what gets me the most. Gone too early and too young. Gone before all the plans had been made and adventures taken. As I watch the horses, it's never easy to make the decision but it a little easier when they tell you they are ready. It's those times that it's so sudden of a loss that I seem to have difficulty in recovering from.


If you've read the last blog post, you'll know that I went MIA and after yet another blow, I need a bit more time to, perhaps not recover, but to recenter. It sounds a little selfish and maybe it is, but I want to make sure that this blog stays on task with the center of attention on the horses and not my sorrows. So I may continue to be absent for a bit longer. Until there is peace in my heart, the words seem to get stuck and can't come out.
Posted by Borderlands Horse Sanctuary at 10:06 AM No comments:

I've been MIA for a couple of weeks now. There's just been too much for me to take in, comprehend, organize, and do. When that happens, I not only disappear, but I shut down as well. So that's what's been going on. It's nothing mysterious.


I hate to say the words but it's true. I need a little bit of time away from not only the Sanctuary but in the paying job (they are ramping up for a couple of major projects for the entire summer and I'm slammed), and a few other stresses that have reared their ugly heads. It's nothing to worry about. It's all manageable but it does require some time away from the computer, time away from social media, and to focus on the horses and enjoy the weather.


We went from a blizzard to 80+ degree weather in under a week. I havent' had nearly enough time to mess with the horses now that the weather is getting nicer. I typically have the corral panels up so they can start getting used to the grass on the lawn. I'm behind by two weeks. It's those two blasted weeks of disappearing. It also meant other stuff didn't get done either.


I'm not trying to play the pity card or anything like that. Just trying to be truthful to not only you but to myself as well. When running a Sanctuary, you can never really pause but sometime it's necessary to take a step back and not even re-evaluate what's going on but to breath.


In the past week, we were asked to take in 5, not all from the same owner and not all with the same situations. I've been struggling with how to manage all 5. It's not possible. I've been so under the weather lately that I can barely care for the ones we have, let alone an additional 5. And of course those 5 don't come with any funds, food, or other donations. I get frustrated because even though we ARE a non-profit, that doesn't mean it makes life easier. We have to fight for everything and shuffle so much paperwork that it's nearly impossible to get funds for anything. I'm not trying to complain, just point out that those that tell me they cant' afford another horse, how do you expect ME to afford another one? Rescues are the same way. Its' all a balancing act. I'm struggling to balance right now.


So after talking with the Board of Directors, we've decided to close our doors to intakes for the near future. It stinks because we haven't taken anyone in since December 2015. There's been a few we've wanted to take in but of unfortunately those came on the heals of losing one of our residents. I don't take their loss easily and just because they are gone doesnt' mean we can instantly bring another one in. I need time.


So the doors are closed until I'm feeling better. When that will be, I don't know. I'm guessing the first of the year but then we'll be in the midst of winter and simply trying to survive. So I guess we'll see. It sucks to close our doors and tell people no. I want to help but without financial help, it's not possible. We've had some generous volunteers but again, with me being under the weather it's impossible to have volunteers that are minors come out. There must be supervision and I can't do it right now. Again, I hate turning away help but what can I do?


I'm guessing that I will return to being MIA for the next little while. I can't make any promises on when I'll be back. I'm still here trying to get through the day. If you have any suggestions or know of ways to help, I'm all ears. I'll try my best to pop on social media but that depends on technology. My phone has decided to not work and so has our internet connect and computer. It makes it difficult to do anything but then again, maybe it's a sign a need to take a step back and breath for a few days.


We'll see. But for now, I'm here even if I'm MIA.
Posted by Borderlands Horse Sanctuary at 2:22 PM No comments: