There's a new member of Borderlands Horse Sanctuary. Please meet my son, Graydon. He was born September 20th, ten days earlier than planned and a week earlier than scheduled. Everything went well, although I was surprised that the doctors and nurses didn't seem to take me serious when I said I was in labor. Apparently having had two babies prior didn't hold any leverage. 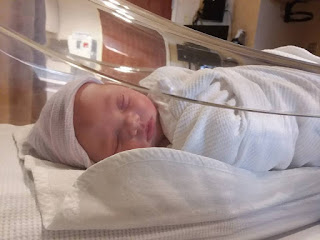 We've been fairly quiet at the Sanctuary since then. There's still so much to do but there's so little that i can do at this point. I'm restricted to doing what I did before I had Graydon, although the doctors didn't realize I was doing way more than I probably should have. But I'm taking it fairly easy and doing what needs to be done but nothing extra.

We've had requests to take in horses but this is the reason why we have been closed to intakes. I'm not going to handle horses that I don't know. I barely handled our Sanctuary horses, there's no way I was going to handle horses I had no history on and risk getting hurt. Because I was "advanced maternal age" I was taking everything with as much precaution as needed.

We won't be doing any intakes for a bit longer until after I've healed a bit  more. This is my second c-section but I'm still taking it slow. I'm just under three weeks out so still taking things easy. I was told the other day that I was doing pretty well for having had a c-section. I don't really have much to go on. The severe and excruciating pain I went through with my first is all that I have to compare the second two births. Nothing will ever compare to that experience.

So for now, this is where I am, snuggling with my son.

We are headed into winter faster than expected. There's snow in the forecasts to the west of us (by just a few miles) and we've been having rain for the past three weeks But because I'm the sole caretaker of the horses, I'm doing the best I can to keep the horses comfortable. We have hay in the pens and have given up thinking the pasture will feed the horses. They are still allowed to graze the pasture but the hay is now a permanent item in the pens until next spring.

I may continue to not be around much. I'm still on Facebook more than I want to be so if you want to catch up on the latest, check us out there.

Posted by Borderlands Horse Sanctuary at 1:49 PM No comments: