It's been pretty quiet at the Sanctuary lately. I think everyone is hunkering down (or at least I hope they are) to let this virus pass. Last fall I stocked up on senior feed for the horses. With only graining three, it takes a bit to go through all the bags of grain. I realize we have a number of seniors but we don't grain them unless they need it. We evaluate their weight and health daily to see if/when we need to start graining.


This winter we've only been graining Dude, Jim, and Jessie (although others think they need grain too). I try to avoid graining just to grain as a treat. It's extra money and although it would make them happy and make me feel better, it's unnecessary calories for some of them. Once they hit a certain point where their body needs it, we'll start. But I digress.


I had started to panic a little because I was going to be out of grain soon and that meant a trip to the store. We are trying really hard to do our part in social distancing. But a trip to TSC is going to be in order soon. Last fall when I was trying to find places for all the grain that we'd purchased, I added an extra barrel. We put all our grain in air tight, food grade barrels to keep the mice away and not worry about mold. They might not be the prettiest to look at but I can sleep at night not worrying about mice getting in to the expensive grain.


So when I was starting to get down there on grain in my normal barrels, it took me a bit to remember that I had an extra barrel full of grain! I'm not sure how long it'll hold us but hopefully we can go another week or two without having to go in. I doubt that it will get us through until this self distancing is done but it'll help make a difference.


I don't want to stock up on grain because we do stop graining once they are on pasture. Although that may be dependent on Dude. He's on Buteless but with warmer weather his hips don't bother him. It's only the cold snap that seems to cause him problems. I do watch him go in and out of the barn and having to make that step does make him pause. So we may just keep graining him all summer long to ensure he gets his Buteless. Every little bit counts in keeping the herd happy and comfortable in their golden years.


Now to figure out do I make a trip in to TSC (and of course come out with more than I needed) or do I call to place and order and missing walking through the store to pick up some extras. It's not nearly as much fun if I can't go in and look around but the reality of right now needs to be taken seriously.
Posted by Borderlands Horse Sanctuary at 7:33 AM No comments:

Life has changed a lot in the last week. I'm not sure how we will return to our normal life or if this will be our normal. Life with a herd of 14 horses along with three small kids, and both Mike and I working has been crazy. It's a bit overwhelming in our house these days trying to keep everyone occupied and still learning.


Because everyone is online, we are trying to be online a bit more to help combat the boredom that some might be dealing with. We are trying to do a Welcome Home to Borderlands series so you can meet each one of the horses with a Live video and an additional post with a bit more personal information about the horse. Last night we started off with Dude.


We are also going to try doing a very short reading program, Welcome Home to Borderlands Reading. It'll only be a few minutes long and it'll be crazy and chaotic like our life. If you see me in pjs, don't laugh. You'll also see hampers full of clothes, my kids, books, toys, and an assortment of who knows what else. But that's what our Home is like and we want you to feel just as Home as we do! W want to help even just a little with spreading some joy during the day. We'll be doing our reading program every day at 11am. If I'm not online right away, don't worry, we'll be online but I'm running late (as normal).


I'll try to do nightly checkins as well. They will probably be back to back with the Live videos of each horse but at least then you can see all the horses instead of just one of the horses. It'll all depend on how long the battery lasts on my phone.


We hope you stick around and even share our posts. Hopefully we can spread some joy and lighten the mood online with our senior horses. Please share.


The Reading Program will be every day this week at 11am. The nightly Facebook Lives will be sometime in the evening but I can't guarantee the exact time. Some time after 5pm. And then we'll post some additional pictures of that horse (preferably summer photos so you can actually see green!) If my battery lasts, we'll also do a nightly check in video just to ramble and show everyone off. It'll be after the Live with


Leave comments and/or suggestions on what you want to see! We are always looking for more ideas to help! And if you have fundraiser ideas, please let us know! Send us a Facebook message or email us at borderlandshorsesanctuary@yahoo.com


Hope to see you online! 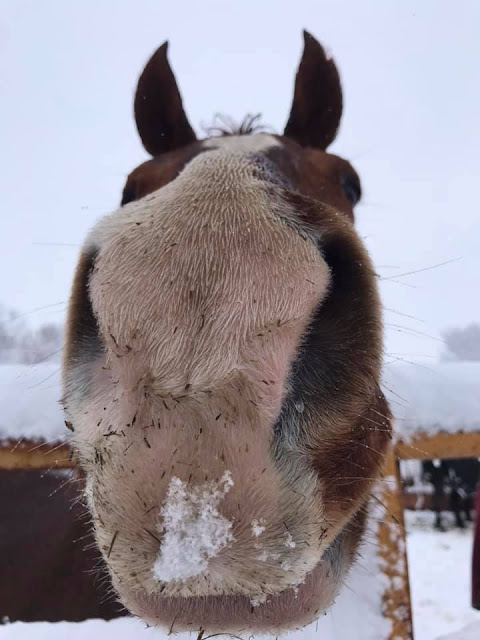 Posted by Borderlands Horse Sanctuary at 2:13 PM No comments:

It's been awhile since I've posted anything. There's been a lot going on and not all of it positive so I haven't wanted to bring everyone down. I'll give a quick rundown and will most likely leave with a warning that it might be a bit before I post again. It's better to not say anything that to say what's in my head.


So last weekend we had absolutely GORGEOUS weather for Light the Night. We were very blessed to have an ad placed in the The Shopping News AND to have the Minnehahah Messenger come out during the event to interview us. If I understood it right, an article about the Sanctuary will be coming out soon. So we are very fortunate and blessed to have that opportunity to not only promote Light the Night but to also share in our cause.


We had beautiful weather for the event. And looking at the forecast for later this week (and after this past weekend) it was perfect timing. Sure we had a little bit of mud but it was gorgeous. In the end we had just under a dozen people stop out for the Luminary Walk. It was more than I had anticipated for having not really marketed it. In fact, I almost thought about pulling the plug on it. My heart just isnt' really into it right now.


I'm actually starting to think that I want to dissolve the Sanctuary again. It would simply be easier. I don't have time to promote the Sanctuary, search for grants, and figure out where the money is coming.  But partly I'm just too stressed out about other stuff to even pay much attention except to the horses who bring me solace.


It's been about a month or so that we found out some news and I'm struggling with understand the whys and hows of it all. It's all wrapped up with family stuff and I'm struggling. So my attention needs to be on family rather than promoting the Sanctuary.


It always feels like whenever I start getting some forward progress, something else stops me in my tracks. I'm getting tired of it. But I'm to the point where I need help with the online stuff. It's not the stuff anyone wants to volunteer for but that's where I need the help.


They are now saying that there's a storm coming for the end of the week. I wish there was nice weather so we could be outside. We are currently on day 6 of quarantine of the coronavirus. Not really quarantined but we are home with the kids, which also means no time to sit and think about how to move forward or to even do more than basic chores. It's nice to be home but I'm still having to work but juggle entertaining the kids while everyone is home. So by the end of the day I'm exhausted from juggling so much. I had hoped to sneak away at the end of the week for a quick vacation but with being on "social distancing" for the next week, there's no need to sneak away and there's no place I want to go. And with our family situation, I don't want to be too far from home in case we are needed.


But with the upcoming storm, I worry for the horses so I guess it's a good thing I'll be home so I can sneak out and put horses in barns or put blankets on. Spring rains are always worse than mid winter storms. Winter storms the horses don't get wet and chilled from the rain first. But with the spring rains, the rains are always cold and they get chilled before the rain turns to snow. I need to finish putting the roof on the other lean to that the tornado ripped off. It's sadly been years sitting there waiting for me to replace it. It's now higher on my list to get done. I need to look for an enclosure for the mares as Jessie can't handle the weather as well. Their previous owner had a nice set up for them but sadly our setup isnt' as nice for the mares.


So there isnt' really a lot going on but there is. Sadly, I just can't seem to put words down on paper to say anything. I'm afraid if I say too much that I'll get too snarky. It's not that we don't have good things happening but I can't seem to see the silver lining in everything at the moment.


Hopefully we hear some good news with the family stuff that's going on and the stress will be lifted. But until then, we are headed for some rocky times and I'm going to struggle. In fact, I'm most positive that I'll be silent on here. If you want to see what's going on, check out Facebook but I expect I'll be quiet on there as well until I can figure out how to actually put a more positive vibe to any post. So if you need to reach me, leave a message on our Facebook page or send me a direct message at borderlandshorsesanctuary@yahoo.com. I promise I'll respond but it might not be immediate.
Posted by Borderlands Horse Sanctuary at 7:31 AM No comments: